Your Personality number, derived from the CONSONANTS of your FULL Birth Name, often serves as a censoring device, both in terms of what you send out, as well as what you allow to approach. It represents the characteristics you project outward, and indicates how others are most likely to perceive you before getting to know you well, and so by learning about your Personality Number you can get an insight of how others might view you. It discriminates in the kinds of people and information you let enter your heart and mind, and represents those aspects of your personality that you feel comfortable sharing with people at the outset of a relationship.

Personality Number is one of the Core Numbers in Numerology that include your Life Path Number, Expression (aka Destiny) Number, Heart's Desire (aka Soul Urge), and Day Number (the day you were born on).

How to Calculate Your Personality Number

In Pythagorean Numerology, each letter in your name is assigned a single digit number, based on the chart below.

Note: If you don't have the chart, you can solve for the numbers by counting the position of the letters in the alphabet ... using your fingers for this is essential 🙂 The letter M, for example, is the 13th letter ... 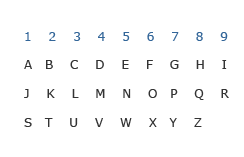 Your Personality Number is derived from the CONSONANTS of your FULL NAME at birth.

i] Assign a number from the chart to each CONSONANT in your FULL BIRTH NAME. This should be done separately for your First Name, Middle Name (if you have one), and Last Name (surname)

What about the letter Y?

The letter Y is a bit tricky to use. Sometimes it is considered a vowel and at other times a consonant, depending on how it is used and how it sounds within the name.

Oprah Winfreys's Personality Number
= 6 + 1 + 5
= 12 = 3
You can use the Personality Number Calculator above to see how your current name is broken down, but also, because it calculates the CONSONANT vibration of whatever name you enter, you can use it to assist you with your own Name Change Analysis.

Those with Personality Number 1 give off an ambitious and dynamic energy. You appear determined, strong willed, in control, and capable of achieving whatever you set your mind to, and as such others are less likely to see you as a pushover. Be wary of being perceived as egotistical, unreceptive, and intimidating.

Those with Personality Number 2 are often seen as friendly, trustworthy, reliable, warm, and unpretentious. You tend to appear more open and approachable, and as a result people are more likely to be drawn to you and ask you for help or assistance. Be wary of being perceived as indecisive and a pushover by some.

Those with Personality Number 3 are often seen as creative and charming individuals, making them more attractive to the opposite sex. You are likely perceived as witty, extroverted, and optimistic, with an uplifting energy. Be wary of over exaggerating, and appearing superficial to some.

Those with Personality Number 4 are seen as being very reliable, stable, consistent, organized , and efficient by others. As such people are more likely to trust you as a person, as well as your judgment and ability to get things done, especially when it comes to making tough business decisions. Be wary of appearing too frugal, predictable and overly serious.

Those with Personality Number 5 tend to appear more adventurous, stimulating, passionate and witty. Your freedom loving and adventurous personality is often the envy of others and you can be an inspiring influence on those around you. Because you can seem aloof, some may not think of you as a dependable or a reliable person. Be wary of appearing superficial, and try to be more grounded.

Those with Personality Number 6 are often seen as warm, compassionate, caring, self sacrificing and willing to help others. As such people often approach you for a shoulder to cry on, or relate their life's burdens. You are seen as easy going, but because you are also more agreeable and see the good in people, some may try to take advantage of you.

Those with Personality Number 7 tend to appear more secretive, introverted, even mysterious and different. Because you seem so withdrawn, people find it harder to get to know the true you. You have a serious, independent and intelligent aura, and as such others are likely to trust and respect you. Be wary of appearing too opinionated and arrogant.

Those with Personality Number 8 are often seen as strong, ambitious, competitive, competent, and confident. You can project an aura of authority and power, and people tend to see you as being well rounded and grounded, with good decision making abilities and business sense. Be wary of appearing too egocentric and greedy.

Those with Personality Number 9 give off a charismatic and somewhat aristocratic appearance. People see you as being in control, with positive and idealistic opinions and ideas, and as such you can inspire and influence those around you, gaining following and admiration. Be wary of seeming arrogant and above others.