Just like every number in Numerology, the Number 1 is represented by a set of character traits and attributes which are both positive and negative.

A balanced Number 1 represents a competitive, driven, and highly motivated energy. This energy is more directed and controlled … it is the ambitious and pioneering force, and those with 1s in their Numerology Chart are more likely to try new paths, take risks, and venture out into the unknown. A healthy Number 1 represents responsibility and loyalty, intelligence and wit, insightfulness, courage, innovation, confidence, independence, and unconventional individualism.

On a more negative side the Number 1 represents an overbearing and bullish character trait, and an overly headstrong and stubborn personality. Opinionated, self-centered, domineering, overly critical, aggressive and intimidating are other, less positive traits associated with the Number 1.

learn more
The attributes of Number 1, both positive and negative, are applied across all the aspects of our Numerology Chart and whether we are looking at our Life Path Number, or Heart’s Desire Number these attributes do not change. 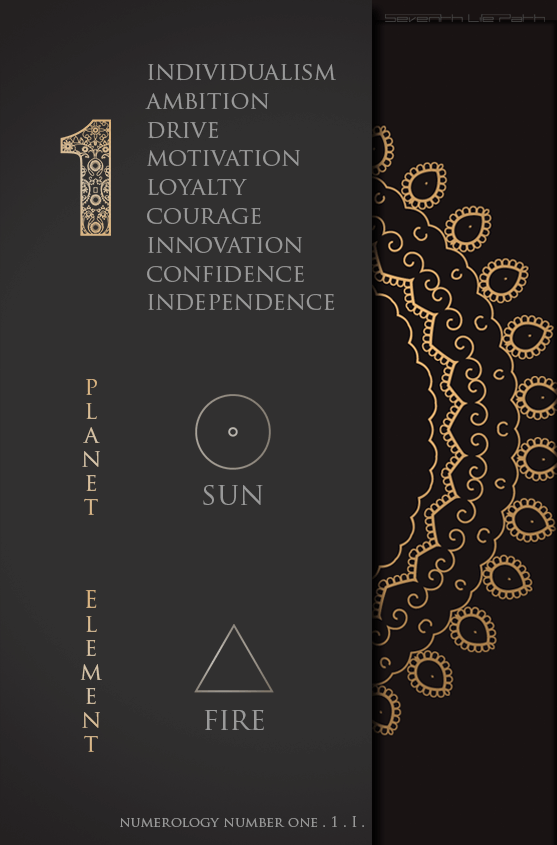 One of Number 1s character traits is INDEPENDENCE, and the following is a very simple example of how this attribute would be used within the context of each of our Core Numerology Numbers …
It is important to note that regardless of which aspect of our Numerology Chart we are looking at, individuals who are well balanced will find themselves exhibiting more of the positive traits, while those who tend to be off balance are likely to exhibit more of the negative attributes that the Numerology Number 1 represents.